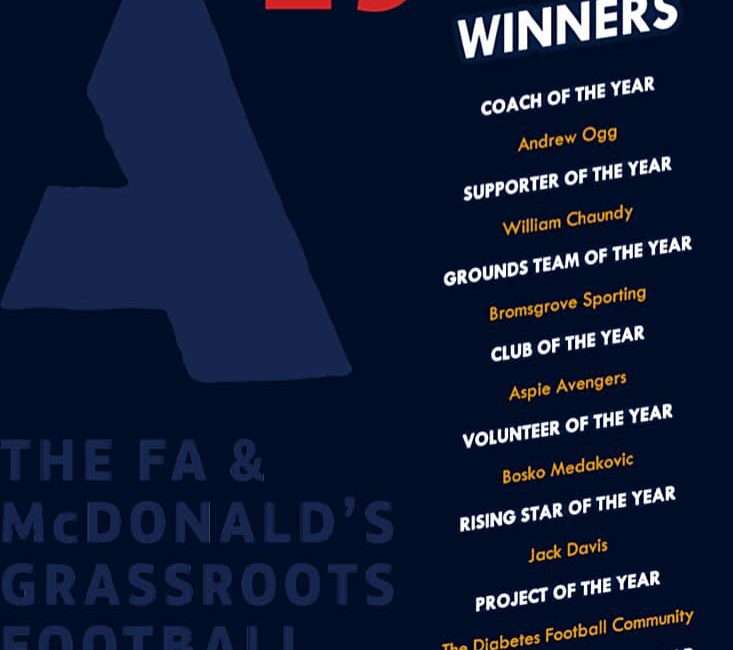 Worcestershire FA have announced the County’s winners of the 2019 FA and McDonald’s Grassroots Football Awards. The FA and McDonald’s Grassroots Football Awards celebrate those people, clubs and leagues that make a positive difference across our communities and it is their chance to recognize the work that goes into the grassroots game whilst saying a big thank-you to the incredible volunteers who inspire so many make football better for all.

They had a substantial number of nominations this year, so a big thank-you to everyone who took the time to cast their vote. An independent panel, consisting of individuals from: Worcestershire FA’s Board, Council, and Youth Council met to review the nominations received. The great news for our club is the confirmation, and justifiably, Mr Badger, Bosco Medakovic, has been awarded the Worcestershire FA volunteer of the year award 2019. True recognition of just what our founder has been doing, for so many Badgers, for the past 19 years.

Congratulations to all award winners, across all the club’s, for your outstanding contributions to grassroots football in Worcestershire. Slightly biased but our ever present, meeting and greeting so many Badgers across the ages, still supporting our development squads, Bosco ‘Mr Badger’ is our volunteer of the year, and he is our club #BadgerFamily