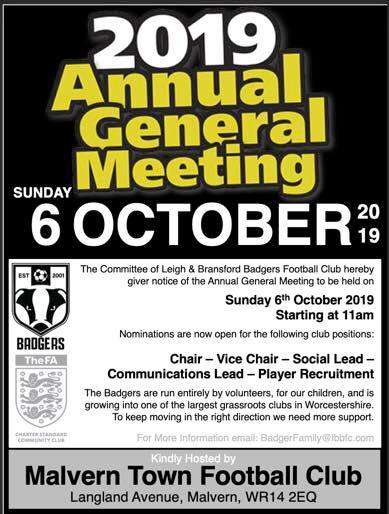 All successful sports clubs are well run and well organised with meetings that are effective. As referred to in the club’s constitution, the original principles for forming the Badgers, the Annual General Meeting (AGM) is Open to all club members and their parents and covers items such as:

The next Leigh and Bransford Badgers Football Club AGM will take place on Sunday 6th October 2019 and the committee asks that:

– Nominations for new committee members are provided in advance (Nominations require a proposer and a seconder)
– The Meeting has as wide an attendance and audience as possible
– All members need to be involved in the AGM to ensure that the club’s decision-making process is fair and representative of the club.
– The AGM is a great opportunity to involve new people in the running of our club